As we start to think about social media marketing, it is important to differentiate paid, owned and earned media.

Paid media includes any kind of media that a company pays for in order to get its message in front of the consumer. Paid media can take the form of social media ads, pay per click and display ads, retargeting, payment to influencers and paid content promotion.

Owned media is the media that is controlled by the company. The primary forms of owned media include the company’s website, mobile apps, and their social media accounts on Facebook, Instagram, and other platforms.  Often, a goal is to drive consumers to a company’s owned media, where consumers can directly engage with the company.

Earned media is what we often refer to as “word-of-mouth”.  Earned media results from consumers’ sharing or mentioning a brand in a message, writing a review, and liking or commenting on a post.  Earned media is important for two reasons.  First, it is considered “free”, although it typically takes an investment to generate earned media. Second, messages that come from a consumer’s friends are inherently more trustworthy and persuasive to that consumer than those that come directly from a brand. 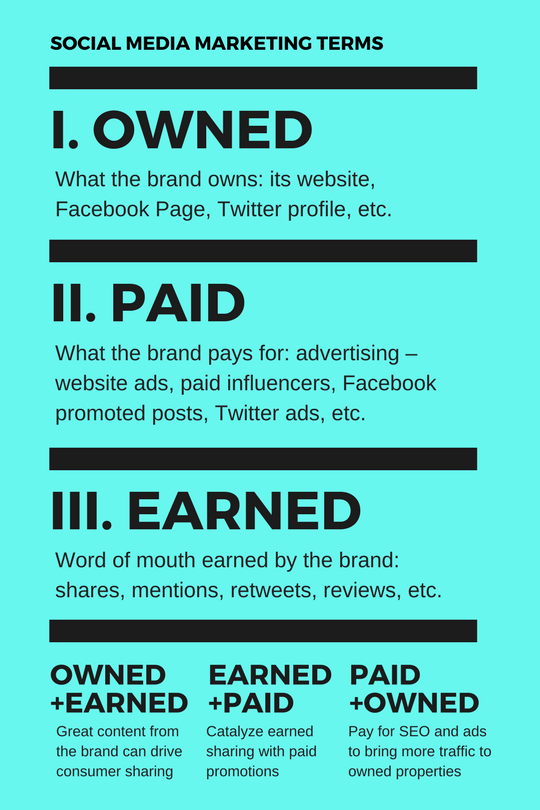 Paid media is foundational for driving people to owned media and for getting content in front of consumers so that they can actually share it (becoming earned media). A major challenge in assessing the ROI of social media marketing efforts is that it can be hard to directly attribute an outcome to a specific marketing action, as described in this short video.